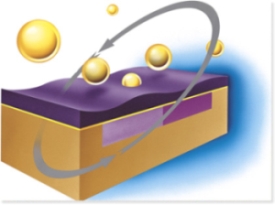 Air humidity and corrosion. In most cases, however, an increase in humidity above a certain limit known as critical humidity (65 – 70%) causes rapid acceleration of corrosion . This is why, above this limit, a thin, invisible water film forms on the metal surface as a result of adsorption and capillary condensation. The phenomenon of this film formation depends not only on the relative humidity of the air, but also on the structure of the metal surface and the presence of foreign substances on it, and above all hygroscopic compounds. Once a film is formed on the surface of the metal (layers) dissolved oxygen in water and absorbed gases, vapors and other chemical compounds create favorable conditions for the electrochemical corrosion process to take place, which is similar to corrosion in liquids, despite, that its mechanism differs to some extent from the latter. The difference lies primarily in the easy access of oxygen to the metal surface which causes it, that the electrode reactions, and above all, the cathode reaction proceeds smoothly.