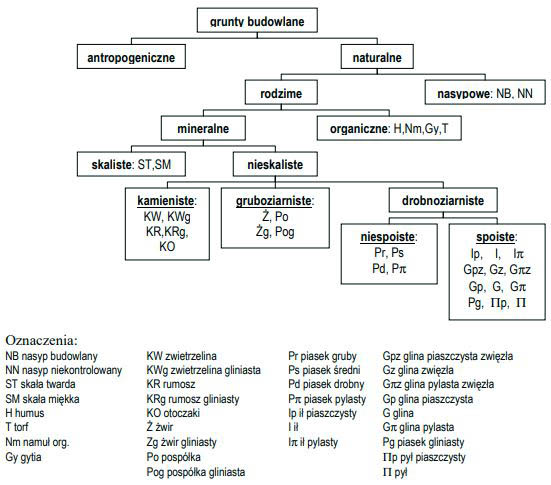 Construction land is all geological formations within the range of the influence of the loads of the erected structures or used for the construction of earth structures (e.g.. dams).

Building grounds are divided into groups and classes depending on their physical and technical characteristics. For each of them, the value of the allowable pressure transmitted through the foundation of the building is defined by building standards. Significant influence on the technical characteristics g.b. has groundwater level and its fluctuations throughout the year.

Building land, except for rocks, have a granular structure, they consist of particles made of primary rocks by weathering and crushing them. The grain size distribution of construction soils is determined according to the percentage content of individual fractions of mineral parts (the clay fraction has grains with a diameter smaller than 0,002 mm, dust - 0.002…0,05, sand - 0.05…2, pebble - 2…25, rocky - with a diameter greater than 25 mm).

The suitability of soil for construction purposes is decisive: the ability of the soil to bear the loads on the structure (compressive strength, shear strength) and the associated resistance to subsidence and ease of earthworks (ease of breakout, the ability to persist, without additional security, walls of excavations and embankments, volumetric weight of the soil).