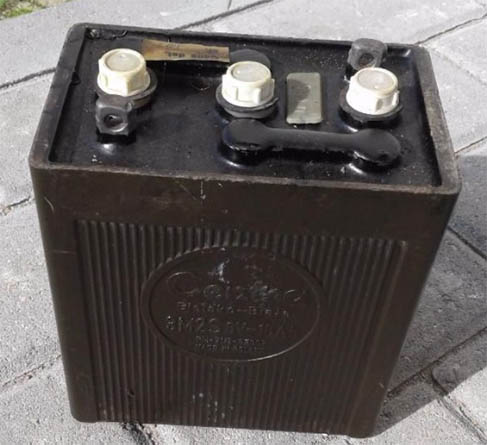 Electric batteries are chemical direct current sources that can be played repeatedly, in the process of charging from another DC source, of consumed electricity resources; secondary cells. Electric accumulator batteries are used to start internal combustion engines, for primary or emergency power supply of low voltage low voltage and medium power electrical installations and devices, as well as electronic and telecommunications devices.

Electric batteries characterize: rated voltage Un - operating voltage at a specific discharge current; rated capacity Q - the amount of electric charge, which can be drawn from a charged electric battery without damaging it; 10-hour charging current l10 - numerically equal to 0.1Q; maximum discharge current (short-lived) lmax - numerically equal to Q. The voltage at the terminals of a fully charged electric battery is 1.2…1,5 A, at the terminals of a properly discharged 0.8…0,9 A.

The electric accumulators connected in series at the factory form a battery, placed in a common plastic housing. A distinction is made between acid electric batteries, in which the electrolyte is an aqueous solution of sulfuric acid, and the electrodes are mainly made of lead and its compounds, and a.e. alkaline, in which the electrolyte is an aqueous alkali (potassium or sodium hydroxide), and the active material of the electrodes are metals (kadm, silver, zinc, nickel, iron) in pure form and bound to hydroxides or oxides.

The basic types of electric batteries include:

Nickel cadmium batteries— akumulatory Jungnera – alkaline batteries, in which the active mass of the positive electrode is a mixture of nickel hydroxide with suitably crushed nickel flakes, negative electrode - cadmium hydroxide with the addition of iron, and the electrolyte is 20…30% an aqueous solution of potassium hydroxide. The source of electricity cadmium-nickel batteries there are reactions:

The flow of the charging current causes a reduction of the active mass of the negative electrode. Oxygen moves out of it, until only pure metallic cadmium remains there, on the positive electrode. During discharge (work acadmium-nickel battery) oxygen moves in the reverse direction, the conductivity of the negative electrode deteriorates, the voltage at the battery terminals decreases. Nickel cadmium batteries have rated voltage 1,2 V, final charge voltage 1,35, final discharge voltage 0.8…1,0 V. They are most often found as single links.

Some data cadmium-nickel batteries domestic production is given in the table.

Lead batteries – acid batteries having a positive electrode made of lead dioxide, and the negative of metallic spongy lead. The electrolyte is 25…40% an aqueous solution of sulfuric acid. The concentration varies in direct proportion to the charge level of the lead battery. The source of electrical energy for a lead battery is reactions:

In a discharged lead battery there is lead sulphate on both electrodes. The flow of the charging current causes the electrolytic dissociation of sulfuric acid; the ions of the acid residue form new molecules of this acid with water, and the simultaneously released oxygen reacts with lead sulphate from the positive electrode; lead dioxide remains on it. From the negative electrode, lead sulphate is removed by accumulating hydrogen ions, which, as it were, returning to its place on the acid residue, they leave metallic lead on the electrode.

During discharge (lead battery work) The acid dissociated by the flow of current causes the deposition of lead sulphate on the electrodes (lead and acid residue are deposited on the negative electrode, lead dioxide, hydrogen ions and sulfuric acid molecules - on the positive; water is also produced as a result of the reaction at the positive electrode). This worsens the conductivity of the electrodes, the concentration of the electrolyte decreases.

Data of some lead batteries of domestic production are given in table.