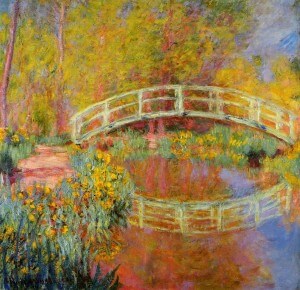 Impressionism is an artistic trend, which developed in the second half of the nineteenth century. Initiated in Paris, he gradually expanded his influence to the rest of the continent, and even crossed the Atlantic Ocean - to the United States. Against the background of the eras, that are detailed in the history of art, this one stands out significantly and is easily recognizable. The images of this trend consist of colorful spots, suggesting that the artist used the brush in this way, that he only applied it to the canvas for a moment, then he would tear off the tool and place it again next to the previously made one, a color trail. These images appear colored, laborious mosaics, through a specific technique of applying paints, they seem to shimmer and shimmer in front of the viewer's eyes.

A few words about the technique

These revolutionary changes in the approach to creating a painting were to some extent influenced by discoveries made in the field of science and technical development., associated with the industrial revolution. The main inspiration for experimenting with how to compose an artistic vision, was the development of optics, fields of physics, studying the properties of light. The discoveries about him were of fact, that white light splits into seven colors and only their interpenetration and play create visions, what can be observed in the real world. The painters were undoubtedly influenced by the discovery and popularization of photography. Perhaps it was a contradictory influence - suggestive, that the canvas will never recreate a perfectly perfect model, and creating with a brush should be more artful, smuggling in this way also the author's sensitivity. The last characteristic element of the reality of that time is the fact, that the paint brushes have been modernized, and synthetic paints began to be produced - cheaper and more accessible than the traditional dyes used for painting. The Impressionists therefore consistently used the seven colors of modern paints, playing with effects and tools.

The name of the current refers to the word impresja, meaning impression. In this particular case, of course, we are talking about the optical impression, being the artist's participation. Image, who gave the whole current its name, that is, Impresja, Sunrise, painted by Claude Monet. The name of the style was created thanks to a journalist, which using the title of the work, ironically commented on the appearance of the painting. However, there is no need to prove, that by the way he hit the nail on the head - the main assumption of impressionism is precisely to stop sensory impressions, which reach human eyes. The specific form of the images becomes clearer, when one looks at the world through closed eyelids or observes the play of sun and water. Impressionism presents, how human sight perceives the scenes unfolding before it, fragments of reality. The Impressionists were particularly fascinated by this, how the appearance of specific places and items changes over time and the time of day changes. There are known painting cycles, presenting a given landscape in several different angles.