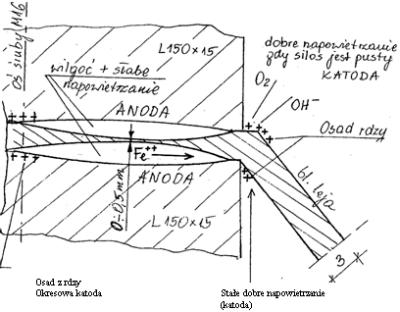 Concentration cell. Two electrodes made of the same metal, immersed in solutions of different concentrations, i.e. in non-homogeneous solutions, will show a potential difference. Such a link is called a concentration link. Similarly, the differences in oxygen concentrations in water are the cause of the local cells, concentration, the so-called. oxygen cells. In practice, such a case occurs very often in a crack in the metal filled with water, where there are differences in oxygen concentrations (air) at different depths. Tam, where the concentration is low, i.e.. deep in the crevice, the anode area is formed, where the oxygen concentration is higher, i.e.. a cathode is formed on the area of ​​the metal in contact with the oxygen-saturated electrolyte. The metal corrodes in the depth of the crack, and corrosion products are released at the cathode. In practice, we usually deal with more complicated cases of the common occurrence of particular types of cells, e.g.. a concentration link and a link formed by combining two different metals, therefore, determining the cause of corrosion can only be made after a careful study of the phenomenon. Corrosion of non-ferrous metals, as well as steel, depends on structural differences and, above all, on the presence of pollutants in the atmosphere and its humidity..