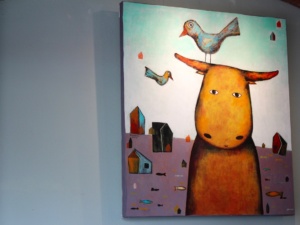 Modern art is very different from this, to what history has become accustomed to. The task of art has always been to express the spirit of the era, but up to a point in the history of mankind it was to follow certain standards of aesthetics regardless of species. It was easy to tell then, which work deserves to be called art. It's not that simple today. Art in a modern version eludes the canons of classical beauty. It is full of ambiguities and allows the audience to interpret it quite freely. Many of them cannot understand, that so-called modern art requires looking for an answer, what the specific author might have meant. Everyone can draw their own conclusion. However, there is a doubt, does it make more sense? Modern art recognizes the cult of the creator and his vision. It does not have to be understandable to contemporaries, because the artist is a visionary, who sees more and is often ahead of his own age. These ubiquitous doubts, even shown in pictures, however, they are an expression of the present day. They show how people are lost in a world without expressive values. World, which frees individuals like never before. Unfortunately, people don't quite know, what they can do with it. Is it worth spending money on modern art?? Some images, despite its non-obviousness, they are simply beautiful. They convey emotions, although it is not entirely possible to say, what they can also represent. Many of them blend in perfectly with minimalist interiors.