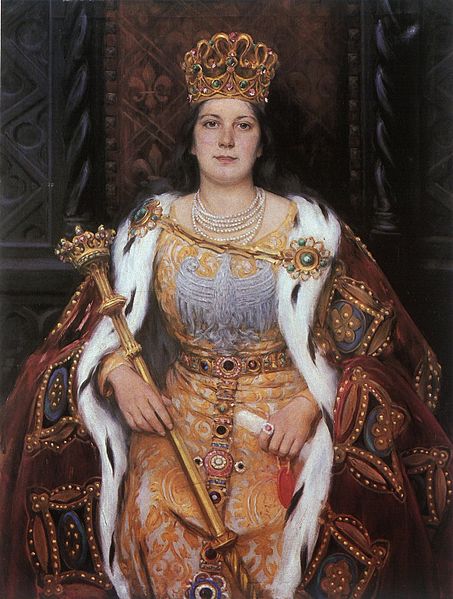 Jadwiga Andegaweńska is a figure who occupies an important and special place in the history of Poland. Her accession to the throne and coronation as king saved the recently reunited country from chaos and collapse after the childless death of the last representative of the Piast dynasty, Casimir the Great. Thanks to the marriage of Jadwiga and the Lithuanian prince, concluded two years later, Władysław Jagiełło, another important stage in the history of the Polish state began, which grew significantly in strength and territorial expansion thanks to the personal union with Lithuania, officially becoming the Polish-Lithuanian Commonwealth. Jadwiga herself went down in history as a person with a great heart and distinguished by numerous virtues - she was recognized as a saint of the Catholic Church, and also one of the patrons of Poland. Visiting Wawel, today you can admire the alabaster tombstone of the young queen, hiding her mortal remains. A memory of this has also been preserved in the Krakow legend, how generous the queen was to the stonemason, who did not have money to treat his wife - Jadwiga's footprint is to be a memento of this meeting, who took off her shoe, to give to the worker sewn to the footwear, an expensive gem. Queen Jadwiga's foot is visible in the preserved church of the Blessed Virgin Mary in Piasek, which is built into the wall. Except for those fleeting traces left over from the queen, however, there are also images of her character in the common consciousness, created and preserved thanks to the efforts of painters.

The collection of Polish kings and princes by Jan Matejko is the most famous and popular collection of Polish royal portraits. Although it was created at the end of the 19th century, when the reign of the crowned heads is long gone, the artist approached his work very seriously, by repainting the images he imagined and completing them with symbolic attributes, complementing the character's story. You know, that while creating the portrait of Queen Jadwiga, Matejko took part in the exhumation of her grave, he was allowed, among other things, to make a sketch of her skull. Realizing an artistic intention, the painter was supposed to give the queen the features of his wife's face. Although it appears from the chronicle records, that Jadwiga was very young, ascending the throne, Matejko's portrait shows her as a fairly serious person, though perhaps this dignity is enhanced by the royal coronation dress, in which she was immortalized here.

Portraits from under a painter's brush

Although the images drawn by Matejko are best preserved in Polish consciousness, they are small, black and white sketches. The Italian painter took on the challenge of drawing royal portraits of paintings as early as during the reign of the last Polish king, Marcello Bacciarelli. Commissioned by Stanisław August, he made a series of paintings, depicting, inter alia, selected Polish monarchs. Among these portraits there is also a beautiful image of Jadwiga. This image is kept in warm colors: both dress the queen, as well as the background of the image, are kept in beige colors, shade of honey and soft white - a golden crown fits well in this composition, marking the function performed by Jadwiga. This portrait shows the queen as a gentle person, and also modest - all the jewelry she is wearing, it is a double string of pearls, placed on her neck. The image thus seems to underline these opinions about Jadwiga, which have been circulating about it so far in the national tradition.

Another example of the presence of Queen Jadwiga in Polish painting, there is a painting by Józef Simmler, titled The Oath of Queen Jadwiga. The painter expressed his intrigue with events, which took place in the distant past and marked groundbreaking moments in the history of Poland. The work is a kind of proof of this, how vital were the discussions about the arranged marriage between the young Jadwiga and Władysław Jagiełło. Among other things, the queen was accused of this, that she was cheating on her forced spouse, rumors were also known, as if her husband made her fear, not warm feelings. The author of the painting presented the moment on the canvas, in which Jadwiga, kneeling down and humbly touching the book of the Holy Scriptures, solemnly denies the accusations against her. He does this with respect to, among others, Jagiełło himself, canon of Krakow, Piotr Wysz and the castellan of Wojnicz, Hansel from Tęczyn, who is holding a decorative Bible. An interesting fact is, that Simmler, he did similarly to Matejko, trying to give the queen specific facial features - apparently the image present in the painting immortalizes the face of the painter's eldest daughter. The canvas is dated at 1867 year.